Collective Arts Brewing has finally landed in Malta, all the way from Hamilton, Canada 🇨🇦

Interestingly enough, the mandate given to this brewery by its owners at the time of inception (2013) was for it to combine “the craft of brewing with the inspired talents of emerging and seasoned artists, musicians, photographers & filmmakers.” Not your usual concept for a craft brewery. So how do they go about being such a grassroots and arts focused brewery?

Twice a year, Collective Arts Brewing invites artists and musicians to submit their work in their “Calls for Art”, and chooses the best artwork from the submissions of international artists. Their art is then featured on their labels, with the beers sold worldwide in some of the leading craft beer bottle shops and bars. To date, Collective Arts Brewing have produced and compensated over 650 artists and musicians for appearing on limited edition cans and bottle labels, and received over 60,000 submissions. The company also features all of the artists and musicians on their website, including audio and video files, where they showcase Indie and Alternative artists, and have also done music pairing sessions with some of their beers!

The result? Each beer can is pure artwork and a sight to behold! Focusing primarily on IPAs, this Collective Arts tasting will consist of 5 beers. Being a primarily seasonal and specials driven brewery, we will go though many limited edition beers, that are highly sought after. The beers also come in large cans (pints) giving the brewery and their artists a larger canvas.

This Craft Beer Tasting Pack therefore contains enough beer for three persons to participate in the tasting session. There is just too much beer for one person to go through in one sitting. It’s a good and fun idea to have 3 or 6 people at a time at your location of choice, and get multiple packs delivered. It’s a fun group activity.

What to expect:
This will be a Zoom beer tasting, consisting of five different beers. A complete Craft Beer Tasting Pack will be delivered to your home for the price of €30.

There will be only one session on Friday 5 March as there is currently only a small amount of each beer available. Place is therefore limited.

And of course the coordinates to join the Zoom meeting and enjoy the guided tasting! Tastings take approximately one hour.

Looking forward to drinking with you online! 🍻 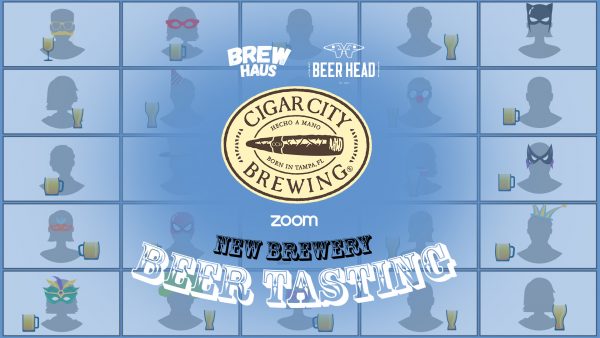