Craft beer taken to the Next Level 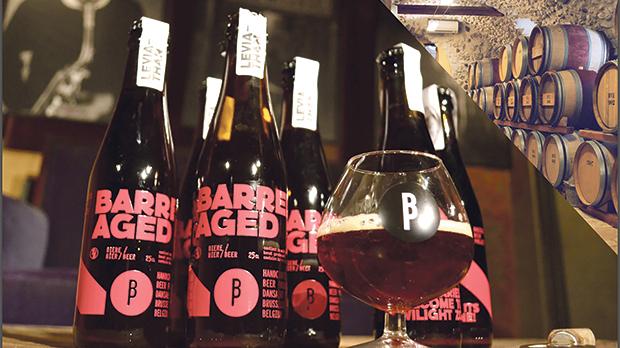 Oak casks are synonymous with wine, cognac and whiskey, used to age the drink, impart earthy aromas and smooth the taste. But the sight of wooden casks in craft breweries is becoming more commonplace, as the art of ageing beer which is stronger in alcoholic volume (normally ranging nine to 12 per cent) is rekindled.

Often referred to as barley wine, due to its higher alcohol by volume (ABV), the brew is made from grain and not fruit, and is thereforea beer.

The modern movement started in the mid-1970s, when an American craft brewer traveled to England and noticed several women at the pub drinking an unfamiliar style of beer. He learned the drink was an old-style, unpopular ale called a barley wine, associated with little old ladies unwinding after long days of shopping. The ladies went for the stronger brews!

Coming back to the US, with a market awash in lagers, he decided to brew more unpopular brews, including the barley wine which could be left to age. The movement really took off, as more discerning drinkers enjoyed having different flavour profiles infused into their beers.

The movement grew and, today barrel-ageing, is a hot trend in craft beer. IPAs, with their ultra-hoppy, bitter ale taste, are still very popular but craft brewers are increasingly turning to wood aging. Beers command a higher price, as barrel-aging complicates the brewing process. Every barrel is different, and many barrels must be blended to get a consistent product. Aging the beer in wood also increases the odds of contamination.

When done well, the wood-kissed brew is worth the hassle. Good barley wine takes on the flavour of the wood, like oak or chestnut, and adopts the character of the barrel’s previous tenant, whether it’s a fruity nose from the cognac barrel or the vanilla from bourbon casks.

The aging process also smooths out the alcohol, drops some bitterness, and adds wine-like complexity because of microorganisms present in the barrels.

With an increasingly sophisticated drinker in Malta, BrewHaus has now introduced Brussels Beer Project’s ‘The Leviathan’, a special release, cognac-aged, Belgian barley wine which is the first of the Belgian experimental brewery’s barrel aged series.